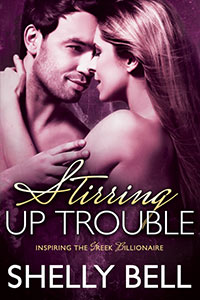 Seduction has never tasted so sweet…

Commitment-phobic singer Viola Dubrovsky can’t stand her boss. She can’t stand his arrogance… she can’t stand his sexy green eyes…and she definitely can’t stand his passionate touch. So when she inherits the building that houses his restaurant, it’s the perfect opportunity to stick it to him. Why then is she postponing her out-of-state move to help him? And why can’t she stop thinking about their kiss?

Greek billionaire Braden Angelopoulos refuses to turn into his aimless father. His restaurant keeps him grounded, which is why he’s determined not to lose it. Seducing Viola is the perfect way to convince her into giving him what he desires. But when he falls for the gorgeous hellion, he’ll have to decide what kind of man he wants to be. Because now that he’s had a taste of her, he has no intention of letting her go….

Excerpt from Stirring Up Trouble

Braden Angelopoulos stepped out of his office into the bustling activity of his restaurant’s kitchen and rolled his shoulders, ready to tackle the next task. “Where are my nuts?” he asked his head chef, Christopher.

Before the sixty-year-old Greek man had the chance to answer, Lola strutted out of the walk-in freezer licking an ice cream cone—an image he didn’t need right now. She stopped in front of Braden, peering up through her long brown lashes, then slowly lowered her gaze until it rested on what was now likely an obvious bulge between his legs. “I don’t know. You want me to check for you?” She winked as she swirled her tongue around the circumference of the vanilla ice cream cone.

The pink-haired, multi-pierced woman had become the bane of his existence. Too bad he couldn’t fire her. Or sleep with her. He maintained a strict policy of not dating his employees, a rule he’d never considered breaking until the little spitfire practically skipped into his restaurant after her late Uncle Alexander had forced him to hire her as the headliner five nights a week. Good thing she could sing because Braden hadn’t dared to refuse the man who had held the lease to his restaurant.

“Don’t worry, boss,” Christopher said, shifting his attention from Lola. “Your nuts went out on the silver platter a few minutes ago while you were on the phone with the dairy supplier.”

Braden glanced back at Lola. She simply raised a pierced brow and laughed her way out of the kitchen.