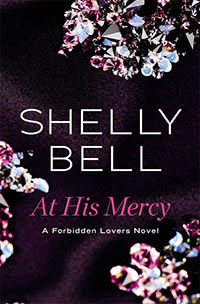 "I had to constantly remind myself to breathe. Shelly Bell packs a powerful punch with her flawless writing and suspenseful, passionate love story."―#1 New York Times bestselling author Jodi Ellen Malpas on At His Mercy

"I was at Shelly Bell's mercy from page one. This novel sucked me in, and didn't let me go until the very last sexy page. This book had some of the hottest scenes I've ever read. 10 stars!"―New York Times bestselling author Alessandra Torre on At His Mercy

"Bell opens the Forbidden Lovers series with a sexy thriller that will leave readers breathless. This novel is sultry and hot in all the right places, with just enough plot to keep the pages turning."―Publishers Weekly (starred review) on At His Mercy

"4 1/2 Stars! Top Pick! With a liberal dose of suspense and mega-hot sex, Bell's compelling first novel in the Forbidden Lovers series is exciting right through to the epilogue...absolutely nothing is wasted in this taut tale."―RT Book Reviews on At His Mercy

One last, no-strings night of indulgence. That's all Tristan wants before he begins a much-needed new chapter in his life. Instead he finds an innocent angel in pink who brings him to his knees.

Isabella is done hiding from the world . . . and her haunting memories. Discovering courage in the arms of a perfect stranger, she finally lets go and sheds her inhibitions.

To Isabella's shock, she soon learns that Tristan is more than her mystery man-he's her professor. But Tristan isn't the only person who's found Isabella on campus. A dark figure from her past has come back for her. Now Tristan will risk anything to protect Isabella . . . even if it costs him his life.

Excerpt from At His Mercy

She swallowed hard. “Feel what?”

The air pulsed with excitement.

She should run now, but the spell he’d woven held her in its grasp. The ease in which he dominated her equally thrilled and terrified her, her heart knocking against her breastbone and her panties dampening from his power over her. This is what she’d wanted. What she’d craved. And yet, she couldn’t have prepared for it, the reality far more powerful than she could’ve ever imagined.

He glided a finger down her neck and across her collarbone, leaving a trail of goose bumps in its wake. “That energy buzzing through your body like a live current. You can’t manufacture that, Angel.” He dragged his finger lower, his eyes on hers as it descended between her breasts, and she held her breath, waiting to see where it would go next. “That’s what makes me the right partner.”

He took a step back, depriving her of his touch.

Like dangling bait on a hook, he’d given her a brief taste only to snatch it away before she could sink her teeth into it.

“So what happens now?” she asked, eager to feel his hands on her again.

A smile tugged at his lips. The man knew damned well what he was doing to her.