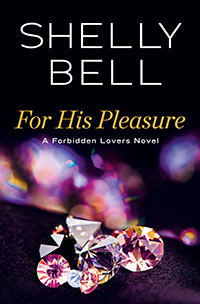 "A perfect blend of kink, sweetness, and intrigue. Highly recommended."―Library Journal Starred Review on For His Pleasure

The only man she trusts is also the most dangerous.

Cash Turner could never resist a woman in need. It's what shapes his desires--and sealed his fate. Recently released from prison after serving time for a murder he didn't commit, Cash has to keep his head down and stay out of trouble. That means avoiding the curvy, delicious temptation of Dreama Agosto . . . a woman who holds his future in her hands.

Dreama knew returning to work wouldn't be easy, but she wasn't prepared for Cash Turner. He's tall, commanding, the first man to spark her interest in a year . . . and her newest parolee. It doesn't take long for Dreama to realize that there's more to him--and his case--than meets the eye. As the two of them investigate the murder that led to his incarceration, they explore the growing desire between them, risking more than her career. Because now that the real killer has set his sights on Dreama, she's also risking her life.