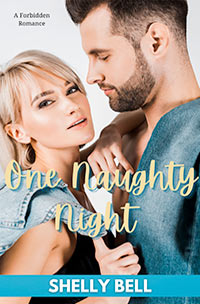 She's his younger sister's best friend.
A cancer survivor.
A guest on his storm chasing tour.
Completely forbidden.
She's too innocent for a man like him.

For five torturous days, he's followed the rules and kept his hands to himself.
But now that he's read her naughty list, all bets are off.
He's going to fulfill every dirty fantasy on that list.

All except the one-night stand.
Because if he has his way, they'll last longer than one naughty night...

Excerpt from One Naughty Night

“Let’s talk more about your list,” he murmured, cradling her face in his large palms.

“Oh no doubt about it, we’ll work our way down your list tonight, which is why I brought you up here.” He wrapped an arm around her waist, retrieved her list from his pocket, and leaned their backs against the ledge. “Number three. Public sex. Tell me what you imagined when you wrote this.”

“I didn’t imagine anything.”

He shot her a look of disbelief.

“Fine.” She buried her face on his chest. “I don’t mean I want to have sex while other people watch. It’s the idea of doing it out in the open where we could get caught that excites me.” She paused, waiting for him to respond. She couldn’t look at him and when he didn’t speak, she wrenched her hand away and pushed off the wall to head to the stairs. “You think I’m perverted, don’t you? Forget the list. It was silly, and I—”

He nabbed the back of her jean skirt and yanked her into the hard plane of his chest, then twisted her around. Without giving her a chance to protest, he kissed her hard, easing her fear she’d offended him with her naughty list. The moment she relaxed in his arms, he receded from the kiss, leaving her breathless.

With his thumb, he caressed the skin under her ear. “I think it’s fucking hot. Maybe it makes you perverted, but honey, you’re my kind of perverted. There’s nothing wrong with consenting adults having sex, even if the sex is considered unconventional by society’s standards. It’s not as if we’re breaking any laws.”

His hands slid down her spine to rest right above her skirt. He leaned in, nipping her earlobe before he whispered, “I think it’s worth the risk, don’t you?”

Her heart galloped at the thought of him taking her in the open, underneath the stars, where anyone could walk through the door. “Here? Now?”

Despite her fear of getting caught, her nipples tightened, and her pussy quivered. “We couldn’t possibly do everything on my list. I mean, how would you, you know, recover to do it all?”

“The guys I’ve been with were good with once a night.”

He squeezed her ass. “Then you’ve been with the wrong guys.”