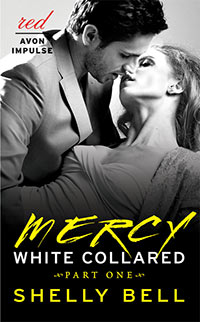 After three hours of computer research on piercing the corporate veil, Kate’s vision blurred, the words on the screen bleeding into one another until they resembled a giant Rorschach inkblot. She lowered her mug of lukewarm coffee to her cubicle’s mahogany tabletop and rubbed her tired eyes.

Without warning, the door to the interns’ windowless office flew open, banging against the wall. Light streamed into the dim room, casting the elongated shadow of her boss, Nicholas Trenton, on the beige carpet.

“Ms. Martin, take your jacket and come with me.” He didn’t wait for a response, simply issued his command and strode down the hall.

Jumping to her feet, she teetered on her secondhand heels and grabbed her suit jacket from the back of her chair. As Mr. Trenton’s intern for the year, she’d follow him off the edge of a cliff. She had no choice in the matter if she wanted a junior associate position at Detroit’s most prestigious law firm, Joseph and Long, after graduation. Because of the fierce competition for an internship and because several qualified lackeys waited patiently in the wings for an opening, one minor screwup would result in termination.

Most of the other interns ignored the interruption, but her best friend Hannah took a second to raise an arched eyebrow. Kate shrugged, having no idea what her boss required. He hadn’t spoken to her since her initial interview a few months earlier.

She collected her briefcase, her heart pounding. As far as she knew, she hadn’t made a mistake since starting two months ago. Other than class time, she’d spent virtually every waking moment at this firm, a schedule her boyfriend, Tom, resented. To placate him, she’d used her dinner break last Saturday to drive to his place and give him a quick blow job before returning to work. She didn’t even have time for her own orgasm.

She raced as fast as she could down the hallway and found her boss pacing and talking on his cell phone in the marbled lobby. He frowned and pointedly looked at his watch, demonstrating his displeasure at her delay. Still on the phone, he stalked out of the firm and headed toward the elevator. She chased him, cursing her short legs as she remained a step or two behind until catching up with him on the elevator.

When the doors slid shut, he ended his call and slipped his cell into the pocket of his Armani jacket. She risked a quick glance at him to ascertain his mood, careful not to visually suggest anything more than casual regard.

He was an extremely handsome man whose picture frequently appeared in local magazines and papers beside prominent judges and legislative officials. But photos couldn’t do him justice, film lacking the capability of capturing his commanding presence. Often she’d had to fight her instinct to look directly into his blue eyes. At the office, his every move, his every word overshadowed anyone and everything around her.

Standing close to him in the claustrophobic space, she inhaled the musky scent of his aftershave, felt his radiating heat. Her trembling body instinctively angled toward him.

Mr. Trenton spoke, fracturing the quiet of the small space with his deep and powerful voice. “This morning, our firm’s biggest client, Jaxon Deveroux, arrived home from his business trip and found his wife dead from multiple stab wounds.”

“I thought you limited your practice to civil law,” she blurted out before she could stop herself. When his jaw grew rigid, she internally chastised herself for the mistake. “Sorry, sir. I shouldn’t have interrupted.”

The silence was deafening as she waited for him to decide whether to accept her apology. Interns had been fired for less.

“No, you shouldn’t have interrupted. However, it was a valid question and, therefore, I’ll let it pass.”

Once the elevator doors opened, they stepped out into the bustling main floor lobby, and she fought to match Mr. Trenton’s brisk pace as they headed toward the parking garage. “While typically I would refer my clients to Jeffrey Reaver, the head of our criminal division, Mr. Deveroux and I have been friends for many years, and he requested me personally. Jaxon’s a very private man, but those who are in his circle are aware of certain . . . proclivities that may come up in the police’s line of questioning.”

What sort of proclivities? It pained her to remain silent.

He paused as if expecting her to screw up by asking another question. She curled the sharp edges of her nails into the flesh of her palms, the biting pain a reminder to keep her mouth shut. A wave of peace rippled through her, and her heart slowed for the first time since Mr. Trenton had requested her presence.

They reached the parking garage and climbed the concrete stairs to the second level.

“For some it is, and for others, it’s a way of life. Unfortunately, the media has a way of distorting the truth to their advantage for the sensational headlines. You remember the recent case.”

A bit breathless from her attempt to keep up with him, she was relieved to slide into the passenger seat of his Mercedes. Moments later they sped toward the highway.

Weighing the consequences against her curiosity, she decided to risk asking her boss a question. “In your opinion, should Mr. Deveroux divulge the nature of his relationship with his wife to the police?”

He tilted his head as if to think over the answer, but she didn’t doubt he’d known the answer before she’d finished asking the question. “At this point, I see no reason why he needs to say anything about it. What happens behind closed doors is none of their business unless it’s relevant to the murder. Until someone brings it up in questioning, I’d advise Jaxon to keep his sex life to himself.”

For the next few minutes, they rode in silence, and she peered out the window at Detroit’s crumbling houses. The car proceeded west to the suburbs and the view changed to a large brick wall that shielded homeowners and businesses from the sight of the expressway. They exited onto a street that led them into a recently developed upper-class neighborhood of palatial homes, strip malls, and trendy restaurants.

Mr. Trenton turned the car into the parking lot of a police station, which was inconspicuously nestled between two office buildings made of the same dark-brown brick. Had it not been for the crammed lot filled with police cars and media vans, she would’ve never guessed they’d reached their destination.

Of course the media had jumped on this. A white woman from the suburbs was murdered. That kind of juicy story trumped the mundane coverage of the upcoming November elections.

As her boss searched for a place to park, she watched four local news crews rushing around, several of them on cell phones, no doubt calling their contacts for more information on the murder.

“Some of the details you’ll both hear and witness today may be graphic. Since the class prepares students by desensitizing them with real crime photos of stab wounds and gunshots, I thought you might be more prepared for what you’re about to encounter.”

She bit the inside of her cheek, tamping down the vivid image of blood-splattered leaves and the sulfuric scent of gunpowder. “It won’t bother me.”

There was no mistaking that her answer had caused him to grin. “I didn’t think it would. I wouldn’t have allowed you to accompany me if I hadn’t thought you were up for it, but I needed to confirm. It wouldn’t look good if my intern fainted over a couple of crime scene photos.”

They departed the Mercedes, and this time Mr. Trenton walked beside her, escorting her inside the police station to the information desk, where he handed a young male officer a business card from his pocket. “Please let Mr. Deveroux know his attorney is here.”

The cop picked up a desk phone and pressed an extension. “Is Mr. Deveroux expecting a Nicholas Trenton?”

She hadn’t stepped into a police station in ten years, but the memory of that harrowing day crashed into her with the force and velocity of a gunshot. Her chest tightened as she tried to breathe. In an attempt to ward off the anxiety attack, she counted backward from one hundred.

Her boss leaned over and whispered in her ear. “You’re okay. Breathe through your nose.”

Pressing her lips together, she sucked air through her nose, expanding her lungs with precious oxygen. How had he known?

“Thank you,” the officer said into the phone. He hung up, picked up a notebook, flipped it open, and handed Mr. Trenton a pen. “You two need to sign in.”

Her boss signed his name before giving her the pen. Hands shaking, she supplied her barely legible information. After she gave back the notebook, the officer buzzed them in and pointed behind him. “Go through those doors to room three, second room on the left.”

As Mr. Trenton stepped in front of her, she surreptitiously obtained a small pill from her Tic Tac dispenser in her purse and slipped it in her mouth. When they got to the interrogation room, he knocked on the door.

Anticipation boiled in her blood. Something was wrong with how eager she was to meet her client, a man who would find himself under suspicion of his wife’s murder even if he was innocent of the crime.

Could she defend a man if she believed he was guilty?

As the door opened and her sight fell on the man hunched over a table, she had a feeling she’d soon find out.